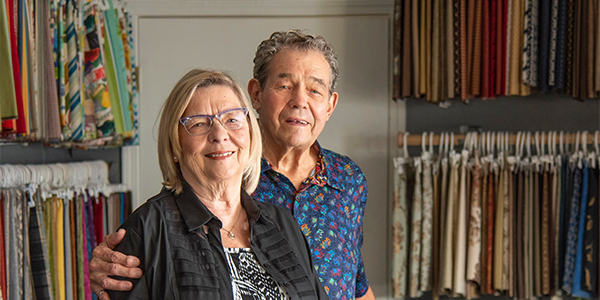 'It's All about the Lord, Period.'

Moody Bible Institute first caught Don and Betty Quass's attention in the late 1950s when their pastor invited Moody professors to preach special services. Don and Betty heard that the students didn't pay tuition. "It was incomprehensible for me to understand that Moody was tuition free," says Don, owner of Shelby Interiors, an upholstery and furniture company in Indianapolis. "We learned that if you support Moody, you support the students who do not have the funds for Bible college and don't want to get into debt."

That began a special relationship that included giving financially to Moody Bible Institute and Moody Radio, attending Founder's Week, and having two of their three children and two grandchildren eventually pursue Bible training at Moody. "You know what?" says Don, now 82. "It's all about the Lord. Period. It's not about Don Quass, It's not about Shelby Interiors. It's totally about the Lord. The Lord has entrusted us with this firm, and I just want to be a good steward of it."

In addition to outright monetary gifts, Don and Betty also gifted goods and services through their business for special projects on the Chicago campus. These types of gifts, commonly known as Gifts In Kind, allowed them to partner with Moody in some unique ways to meet the needs of the ministry and also experience tax savings through their charitable gifting of labor, services, and materials to Moody.

Don's father started Shelby Interiors in 1931. Over the years the Lord has blessed the family-owned business tremendously. Don says, "Here's the way I feel about this: The more business and the more money the Lord entrusts me with, the more I can give."

Thanks to good Bible teaching, Don and Betty's faith grew so much that in 1967 Don founded a church in his hometown of Indianapolis that grew to more than 400 people. A decade later he took time off to travel as a full-time evangelist, crisscrossing the United States and Canada. Every year he would select one Bible conference to attend- and it always was Founder's Week.

"We've heard some fantastic preaching," says Don, who has attended for more than 50 years. "The spiritual growth that Betty and I and our family receive from going to Founder's Week is just astounding."

When Don and Betty returned full-time to their upholstery business, their love for Moody continued. After urging then president Joe Stowell to start a Moody Radio station in their area, they joined the advisory board and were quick to give to help fund the station's new building in 2004. They support WGNR and listen every day. "We wouldn't miss Lutzer, Jeremiah, Swindoll, Evans, MacArthur, Begg, and now Jobe," Don says. "We hear all of them."

Sometimes members of his crew hear Moody Radio too. Two of Don's 10 employees were riding in his car recently when one piped up: "That sounds like that station you listen to all of the time, Don." He replied, "Yes! That's Moody Bible Institute's radio station, WGNR, 97.9 FM."

The Quasses are thrilled that their children received training from Moody. Their daughter, Michelle (Quass) Smith, was there for a semester, and her daughter, Tyler, is now a junior at Moody. Don and Betty's youngest son, Rod Quass '93, met his wife, Ami (Walker '93), at Moody, and this fall Rod and Ami's daughter, Rilee, began her studies at Moody.

With all of that Moody involvement, Don and Betty have become adept at identifying Moody alumni. When Betty attended a Bible study at another church recently, she heard a new pastor present the lesson. Impressed, she turned to a friend and said, "He has to be a Moody grad." Her friend said, "Oh, he is!"

Don laughs. "It's unbelievable that when you are around people-pastors, leaders, laymen- you can almost invariably tell that they've been to Moody or are an associate of Moody. They're different, peculiar, outstanding people. In their mannerisms and their spirit, you can tell that they've been exposed to Moody Bible Institute."