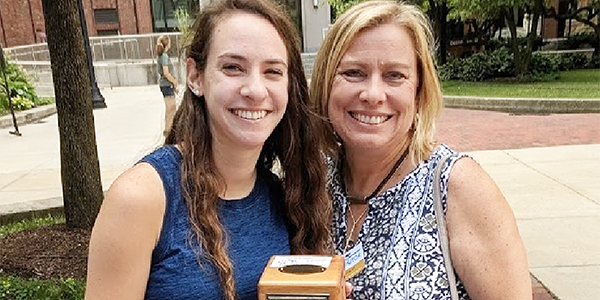 Putting Her Money Where Her Heart Is

During Spring Share, Denise Hatton called Moody Radio with a pledge, and a Moody Bible Institute student named Kaci answered the phone. That call would expand Denise's understanding of Moody-and her planned giving.

Indeed it had been 30 years since she became a born-again Christian, and Moody Radio had been a daily companion. "I got so discipled by Moody," she says. "I lived for Dr. Stowell's messages on Sunday. I listened to Focus on the Family, Tony Evans, Chuck Swindoll, even Steve Brown, as crazy as he is. And the music carried me through a lot too."

She even got to celebrate her spiritual birthday on May 20 with a visit to Moody Radio in Boynton Beach, Florida, the station that had helped her grow spiritually. She sat in on the WRMB morning show broadcast and then visited with the people behind the microphones. "It was such a special time because I've heard these voices for years," she says.

She was already a regular giver to Share, but now her knowledge about Moody grew as she talked to Kaci. Denise heard how students are responsible for paying their room and board but donors provide the cost of tuition. This allows graduates to serve in ministry without being delayed by burdensome debt. Kaci told Denise about an upcoming summer internship in Washington State and her future plans for international children's ministry. "Kaci's heart was so mission-minded toward the least of these," Denise recalls. "When you say, 'I want to give myself on the mission field in another country,' It just did something for me."

Then before hanging up, Kaci asked, "Is there anything I can pray for you about?"

"Oh, goodness," recalls Denise, who shared about some family problems. "And the next thing you know, I'm crying my eyes out as this young college girl is praying for me and my family."

A couple of days later, she told Doug Crisafulli, her Moody Stewardship representative, about her wonderful phone call with Kaci. Doug found Kaci and shared Denise's contact information. Soon they were communicating with each other and hoping to meet sometime on campus.

During a recent visit this fall to Chicago, Denise toured Moody's campus, including the WMBI radio studios in the new Chapman Center. She also met with individuals from the Stewardship team, as well as Jim Chadwick, Chief Investment Manager who oversees the Institute's professional Trust Management services to discuss options on how to best steward what the Lord had entrusted to her.

Denise also met Kaci, who had just returned from her internship. "Missionaries, pastors, youth leaders, music worship leaders-they don't often make a lot of money," Denise says, "so I think it's fantastic the vision Moody has to be able to put people in the field without a lot of debt."

Denise's gratitude to the Lord for all He has done in her own life has led her to look for ways she can continue to support the Christian ministries she loves in the hope that other's may also be reached with the redemptive, life-changing gospel of Jesus Christ. One meaningful way was to update her estate plan through a Revocable Living Trust, naming Moody as a beneficiary of a legacy gift. "I will be remembering Moody significantly when I pass," she says. "I feel very strongly about what Moody does, not just the radio ministry but also training leaders and aviation pilots and allowing people to go to college," she explains.

"God has provided for me quite well," she says, "and I don't want the money for myself. I want to be able to give to the kingdom, both now and in the future. What I love about Moody is that what they do, they do with excellence," she says. "I believe that's how God does things, and so I want to be a part of that excellence."